The total number of Ohio Utica/Point Pleasant permits issued in July 2013 hit an all time monthly high at 75. Year over Year, the fist seven months of 2012 saw 218 permits issued vs. 382 permits issued through July of this year. 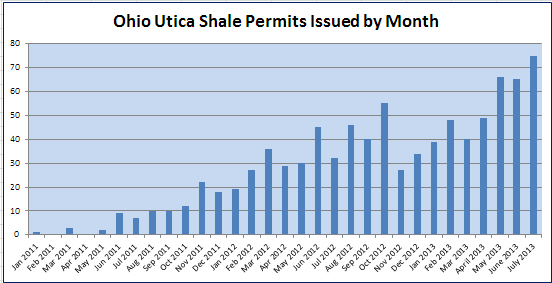 A map of July permits issued can be found here.

In addition, the August 17 report showed a total of 52 wells classified as "drilling", a big jump from the mere 12 wells classified as "drilling" back on May 25th of this year. A map of those well given the status of drilling can also be found by visiting the maps page. A relatively narrow and focused SW to NE band still still looks to be in place, identifying where most believe that profits will be higher and risk lessened. At about six to eight million needed to drill, produce, and complete each well, you can be sure that great care is taken to stay in the most profitable zones, or at least where those zones are believed to be with the least amount of uncertainty. Of course other factors go into deciding where to drill, including proximity to infrastructure, though profitable amounts of hydrocarbons in place and the ability to bring that hydrocarbon to the surface is paramount, as well as tapping into a hydrocarbon that favors liquids over gas.

It seems like there is no stopping the Utica. Good news for those in the SW to NE trend. And it is still early days so we can expect some cautious expansion into higher risk areas, especially if or when natural gas prices rise.
Posted by Greg at 9:47:00 PM