On September 20th the Ohio Oil & Gas Energy Education Program or OOGEEP released a study detailing the economic impact of the natural gas and crude oil industry on Ohio. The Utica Shale was cited as the driver of the increased economic activity. According to the report, the increased activity would help support or create 200,000 jobs, and a $12 billion wage and person income boost by 2015.

The study also pointed that even in 2010 the oil and gas exploration related to the Utica Shale accounted for $793 million in salaries and personal income for Ohioans, $90 million in royalty payments to locals, and $32.7 million in taxes. 2011 to 2015 projections increase the numbers significantly.

“The data clearly demonstrates the transformative force oil and gas exploration and development could have on the state’s economy,” said Rhonda Reda, executive director of OOGEEP. “Ohio has been given great geological gifts and the economic potential is tremendous.

Chesapeake reported today that they have "achieved key production milestones" in Utica Shale. Aubrey McClendon stated that "We are pleased to announce very strong initial drilling results from wet gas and dry gas phases". The Utica Shale play appears to be poised for a long and profitable run, particularly in the wet gas area of the play given the ability of oil prices to be sustained at a relatively high (profitable) level, despite the downturn in the economy. More to come, surely. 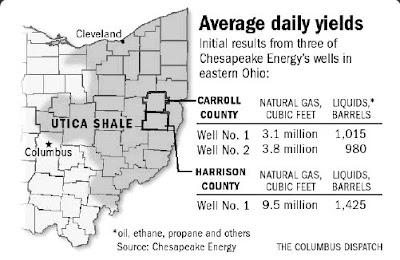 The complete news release from Chesapeake Energy can be found here: http://www.chk.com/News/Articles/Pages/1610725.aspx
Posted by Greg at 12:30:00 PM