BP's announcement yesterday that it is pulling out of the Utica Shale should not come as a surprise when looking at their acreage position (Trumbull County) and reported Q4 2013 production results. BP took a chance testing this area. Such risk is necessary to better define the extent of the play. Others seeking acreage in Trumbull County should thank BP for getting some results in on such areas to the north.


Trumbull County, at least in Hartford, Johnston, and Mecca townships do not look to be prolific enough to merit further investment, at least for now using current methods. The BP Trumbull County production results must have been a significant disappointment, though oil and gas companies are accustomed to a level of risk when exploring untested acreage. This also points to the fact that we are working with an inexact science. BP must of had some indication that the tens of millions spent had some chance of success. We don't know exactly what is down there, despite the best geoscientists studying the area. Production results are the yard stick, though even then, the methods used for locating the well path and fracking and completing the well can all have a huge impact on production.

The map below, showing the BP wells (labeled "B"), detail the locations, results, and other operators in the area. Things look better further south. Halcon's 5-well pad to the southwe looks to be going ahead.

Brammer and Halcon are the only other operators in the county at the moment. The first of Halcon's wells in the southwest portion of the county looks to be the best performer of the bunch and the fact that Halcon followed this up with a 5-well pad and another well drilled must be a positive sign.

The Ohio Department of Natural Resources (ODNR) released Q4 2013 production numbers yesterday for Ohio's Horizontal Utica / Point Pleasant Shale Wells. The report sheds some light on why drilling activity is where it is today and what should be the trend going forward. At the same time, most believe that we are still in the early days so things will evolve as more and more data helps to better define the best areas.

Production data summed by county below is below.

For a map of Q4 2013 producing wells including production data for each well (minus a few (11) as explained on the page), please visit the production map here.

The April 12, 2014 release of Ohio Utica/Point Pleasant shale activity report showed twelve new permits issued for the week, dominated by XTO Energy with eight new permits, all in Belmont County. CNX Gas added three new permits, two in Monroe County and one in Noble County. Statoil came in with one new permit in Monroe county. A map of the newly permitted wells is found below. 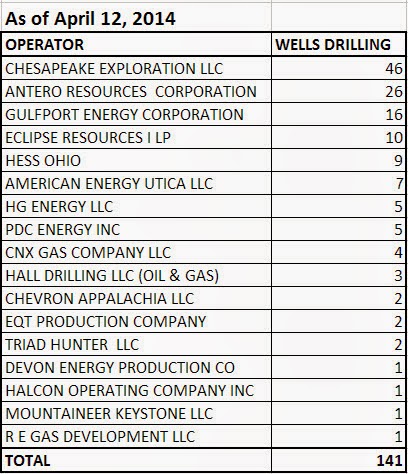 Yesterday, Gulfport Energy Corporation released new details of their Utica Shale Investment. The company highlighted
The report also shows where Gulfport and many others believe the Utica Shale is producing the various types of hydrocarbons (oil, condensate, wet gas, dry gas) and highlights what Gulfport believes to be their premium acreage position. And finally, the report outlines the access to the all important infrastructure required to move and process extracted hydrocarbons.

The complete investor presentation can be downloaded here.


Disclosure: The author of this article owns shares of Gulfport Energy
Posted by Greg at 6:44:00 AM

The April 5th 2014 update from the Ohio DNR shows 133 wells drilling in the Utica/Point Pleasant in Ohio. The map below shows drilling activity by county. According to Ohio State geologist Mike McCormac, the higher activity corresponds to the "wet gas" window, with dry gas to the east and a mostly unexplored oil window to the west.


And with a reported cost of 8-10 million dollars to drill each well, this activity equates to a big "bet" by the oil and gas operators on where they expect to get the best returns. This also indicates a level of de risking and confidence in return on investment. Many believe that we are in the early days so we should expect some cautious exploratory wells to appear away from this core area but there is a lot left to exploit in these core counties.
Posted by Greg at 7:59:00 AM

A complete breakdown of wells classified as drilling:


Click HERE for Large Version
Note: This LARGE map includes a blue "Filter" tab in the upper left that allows you to filter the map by any attribute including status, operator, county, township and more. Source: Ohio DNR
Posted by Greg at 9:23:00 PM